The most remarkable aspects of the twenty-fifth event are the role of the Festival in the internationalisation of the Catalan stage, the roots in the different areas and spaces of our cities (schools, social entities, institutes, associations, etc.), the presence of a diverse and heterogeneous audience, the quality of the spectacles premièred and the momentum of Temporada Alta on the Catalan stage. The most prominent artists this year include Krystian Lupa, Thomas Ostermeier, Peter Brook, Guy Cassiers, Milo Rau, Nicolas Stemann, Rocío Molina, Mauricio Kartun, Xavier Bobés, Jomi Oligor, Shaday Larios, Lluís Pasqual and Àlex Rigola. 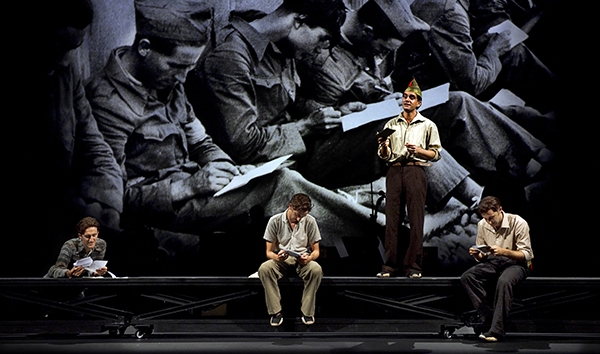 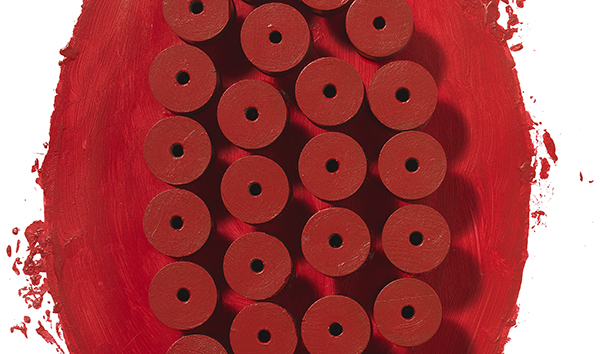 In addition to bringing together some of the most notable contemporary Catalan artists, the posters for the different editions of the Temporada Alta festival provide another curious fact: many of the artists who have created the posters are related, in one way or another, to the world of the theatre. Narcís Comadira, as well a painter and a poet, is also a playwright. Frederic Amat has developed a prolific career as a set designer. In the work by Carles Santos, music, theatre and the visual arts are often inseparable. Jaume Plensa collaborated with La Fura dels Baus in some of the early operas for the company. In addition, there are other artists who don’t have a direct connection to the theatrical world, but one could say that their work also draws on the ritualistic and festive roots which are there at the origins of the theatre. This is the case with Antoni Miralda, known for his mass performances and also of Eulàlia Valldosera: the installations by this artist evoke intimate rituals and which sometimes have both the fragile and ephemeral character of a play.

The Temporada Alta festival is 25 years old. Consciously or unconsciously, Salvador Sunyer has commissioned the poster for this edition from an artist, Pep Duran (born Vilanova i la Geltrú, 1955), who, among the roll call of artists with whom he has collaborated, is, along with Frederic Amat, the artist with the strongest relationship to the theatrical world. In addition to be an artist, Pep Duran is also a set designer. He is a professor at the Institut del Teatre and has a hand in the set for the staging of The Courage to Kill, by Lars Noren, by the Director Magda Puyo which the TNC will release in October. The poster of Duran has had a similar impact to that caused by the posters of Àngel Jové and Antoni Miralda. The split melon poster by Miralda caused many explicit comments. That of Pep Duran, a red oval, full of holes or protuberances that have a hole at the end, could cause the same. But it isn’t like this. Looked at more closely, it can be seen that the poster of Pep Duran is, in fact, the photograph of a piece in relief. The protuberances are reels of thread. As he himself explains, using these the artist wanted to evoke “the thread of Ariadne, the thread of the 25 years of the Festival”. The reels could also be the “25 eyes”, as if the poster was a portrait of Argos, the mythological giant whose head was covered in eyes and who never slept. “They are a sign in the sky”, concludes the artist, thinking about how his work will be seen on the banners. On the other hand, the reels can evoke the textile past of Coma-Cros, where the headquarters of El Canal are based, although it seems that authorities are not willing to thread the needle and put the operation of the center under full sail.
For Pep Duran, the poster is not a strange medium. He has been making them since the 70s and has even made them for his own exhibitions. The spools that he has used for the poster of this edition of the Temporada Alta festival refer to humble materials that characterise his work. They are used to make the link with art povera, and above all, as he says himself, “with Antoni Tàpies, Joan Miró and Joan Brossa”. In recent years the Macba Museum has exhibited two pieces that embody the inventiveness of Duran with such materials: Retaule laic a monumental ceramic that could be seen in the La Capella in 2011 and, last year in the exhibition Especies of spaces, an installation consisting of the recycling of a number of earlier works.

The Pleasure Island is the audio-visual production we are using to present the Festival this year. It is a hybrid between an advertising spot, a short film, a video-clip and a meme. Temporada Alta and Nanouk films have once again joined forces to present this proposal as the shot from the startingpistol for this year’s Festival.
Year after year, the location where the spot is filmed has always played a role of the utmost importance: in 2015 Greece wasthe location chosen. This year, for 2016, it is the “Manhattan” of the Spanish coastline: Benidorm. The system for shooting the film has been very similar: anextremely small team, a great deal of fieldwork and a penetrating interaction with reality. The final aim was to produce a signature piece with high artistic content.
If last year the aim was to form a reflection on Europe, this year we have wanted to focus on our own country, whether that is Catalonia or Spain. The objective was to involve the regular audience, the artists and other cultural agents as stakeholders in the Festival so they all feel represented and in this waymanage to create its own identity through a medium, in this caseaudio-visual, which is truly universal.

Pleasure Island or the Island of Games is where Pinocchio, Carlo Collodi’s famous character, ended up looking for endless fun.  The infinite roller coasters, the drinking and gambling were a wonder to all the children who had run away from home to escape their obligations at school. Little by little, absolutely relentlessly, they turned into donkeys. Eventually they were used as slaves, as the only thing they were good for was carrying rocks both day and night.

In contrast to other countries with more tradition, here at home -especially after the financial crisis- one has the feeling that culture has little more objective or justification other than being mere entertainment. It is just another sector of the leisure industry so you can disconnect and have a bit of fun. One has the feeling that it is taken for granted or that somehow that creativity, research or culture requiring a minimum of effort is a waste.

For this reason, as an explanation for Temporada Alta, this year we wanted to produce a spot with a powerful critical viewpoint which hopefully leads to a certain reflection on what we consider to be a major danger: to incorporate this thesis into the collective imagination whilst not forgetting that if there is one thing that both art and culture possess is that they give power to the people and they provide us with the tools necessary to construct what we are and what we will become.

If the culture of this land is to exist solely to disconnect and have a bit of fun and nothing else, then the Temporada Alta festival has failed miserably and we have spent the last 25 years wasting our time.

Preferences regarding schedules for going to the theatre, the commitment and fidelity of the audiences, and the fact that the Festival is a tool of tourist and economic dynamism for the region, were the main conclusions drawn from the survey Temporada Alta 2016 carried out amongst 1,861 people registered in its database.
The main aim of this questionnaire was to gather opinions in order to improve the relationship of Temporada Alta with its audiences and to assess the financial impact that Temporada Alta has on the region.
The Festival’s excellent audience figures (45,000 people) is reflected in its benefit for the region, particularly with regard to tourism, commerce and the hospitality industry.

The survey also confirmed the audiences’ commitment to the Festival and culture. 99% said they would come back to the Festival and 100% said they would recommend it (only 8 people of the 1,861 who answered the survey said “no”). The attributes of the Festival which stand out are the quality and variety of the productions and the international, contemporary programming which has become one of the identity symbols of Temporada Alta. On the other hand the main complaints from some audience members were regarding the high prices and the speed at which tickets sold out. Schedule compatibility with public transport and restaurants is another of the improvements demanded. Even so, it is important to note that 28% of the public would not change anything and that 98% had a good experience at the Festival.

This survey, designed by Temporada Alta, was carried out by email on 5 December among the audience members recorded in the Festival database who bought tickets for the 2016 edition.