A health, social and cultural crisis that has changed everything and placed us in a state of absolute uncertainty. But the arts have always kept moving and will keep moving in this time of crisis and confusion! We would like for the 29th edition of Temporada Alta to come off much as it always has, which is why our programme still reflects the pillars of what our festival stands for: internationalisation, support to our country’s creative artists and authors, our ties to our audience and the community, projects with social and educational content…

We have been working for months to ensure we offer the highest standards of safety in our theatres and art spaces, with safe distances inside the performance halls and all the required measures. The festival this year will have a slightly smaller in-person programme, but we have incorporated a remote section to our programme: the digital environment provides us new opportunities to explore. That is why we have wanted to take advantage of the current circumstances to revisit certain aspects and sketch the outlines of what the festival might be in the future. 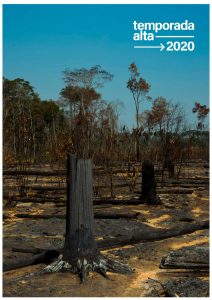 Cristina de Middel: the heart of the Amazon burns in Girona and Salt

Last year’s fires in Brazil were catastrophic: according to Brazil’s National Institute of Special Research (INPE), between January and the first three weeks of August, 71,497 outbreaks of fire were counted, half of which were detected in the Amazon region. The fires occurred in several states in Brazil – Roraima, Acre, Rondonia, Mato Grosso do Sul and Amazonia – and the smoke was such that it darkened the skies over São Paulo, on the other side of the country, after extreme-right President Jair Bolsonaro relaxed the controls of the environmental agency, IBAMA, and signed legislation favouring agriculture and mining, activities that are partly responsible for the fires. It is no surprise to be talking about the environment in the context of performing arts festival like Temporada Alta: the artists who perform in each edition bring many current issues to the stage. Another reason is the festival’s growing presence in Latin America. All the same, the specific reason why this text starts by describing the ravages of the fires in Brazil is to announce what the photographer Cristina de Middel is setting out to convey with the image of this year’s edition, the 29th: “As the festival gave me a blank cheque, I looked for an image that would be aesthetically attractive yet behind all those colours there is a message of alarm to reflect the times we live in. I really like posters, they represent a different use of the image”, she points out.

This is the first time that Cristina de Middel has been commissioned to produce a poster, although other images of hers have been used on other posters. “The situation of the fires in Mato Grosso, where I took the photograph, was terrible”, says the artist, who likes to leave a margin for the viewer to make their own interpretation of the image: “We don’t know if it’s for good or ill, if it’s right or wrong, the image can be read several ways. Each photograph is like a word, and you include it in a sentence so that it says one thing or another. I think it’s fantastic to recycle the meaning of an image; it’s a triumph of photography”, she explains.

Cristina de Middel left Spain almost ten years ago and has been living between Brazil and Mexico in the last five. The coronavirus pandemic has reduced her pace of work and, after becoming known for her photography with a social focus, as she lives in the midst of the rain forest in the state of Bahia, she is now moving forward with a project on the struggle between Man and Nature: “It’s a project I’m working on with my husband, Bruno Morais, with the animals and insects that come into our home”. De Middel stresses that her experience of Nature is “deeply immersive”. “The invasion we are conducting is becoming increasingly evident. When you have a house in the middle of the jungle, you suddenly come across snakes, bats and all kinds of insects, as big as your fist. It’s not even a war, the space belongs to them, and we are compelled to reflect on our role in Nature”, de Middel concludes.

De Middel’s commission can be related to another photographer who has questioned the limits of photography: Joan Fontcuberta (2006). And with him, Eulàlia Valldosera (2014), because they share the same ecological concern.

Photographer Cristina De Middel (Alicante, 1975) has been an associate member of the agency Magnum since 2017 and lives and works between Mexico and Brazil. Of her own work, de Middel, who received the Spanish National Photography Award in 2017, states that it combines “documentary and conceptual approaches” and that it plays “with the reconstruction of archetypes and stereotypes that help to blur the separation between reality and fiction”. After working for ten years in the print media and as a humanitarian photographer, de Middel’s career took a turn with the photobook The Afronauts, a re-creation through mises-en-scènes of the Zambian government’s failed mission to travel to the Moon. With this book, she was the first Spanish finalist for the prestigious Deutsche Börse award in 2013, and in that same year she won the International Center of Photography (ICP)’s Infinity Award.

Cristina de Middel holds a degree in Fine Arts from the Polytechnic University of Valencia, and a postgraduate degree in Photography from the University of Oklahoma and in Photojournalism from the Autonomous University of Barcelona. Among the more than a dozen photobooks that she has published are Party (Editorial RM and AMC Books, 2013), This is What Hatred Did (Editorial RM and AMC Books, 2015), Muchismo (La Fábrica, 2016), Cucurrucucú (Editorial RM, 2016) and The Perfect Man (La Fábrica, 2017). She is also well-known in Catalonia, as in 2017 she won the first photographic prize organised by F.C. Barcelona. Cristina de Middel is represented by the gallery Juana de Aizpuru (Madrid).

Some of the collections in which one can find works by Cristina de Middel are the New York Metropolitan, the Polytechnic University of Valencia, the Ibiza Museum of Contemporary Art, the Sarthou Carreres Foundation and the art collections of the Espiritu Santo Bank.