We’ve reached our 27th festival with a powerful schedule from different genres and fields geared towards all kinds of audiences, with the desire to remain a flagship event on the national, state and European stages. We continue to excel as a significant driving force in scenic creation and we have positioned ourselves as one of the main sources of production and creation in our country.

In addition, Temporada Alta 2018 will seek to express its support for freedom of expression and, at the same time, provide an open door for any discordant voices which are sometimes silenced. In this regard, the Festival will take the pulse of society and schedule a wide range of productions to reflect our current-day society, in which voices very different from those of the predominant discourses will be heard.

We are thus establishing ourselves as one of the main platforms for the exhibition and production of performing arts in Southern Europe, with the following lines of action:

Isabella’s room by Jan Lauwers & Needcompany is the proposal set to open the festival, which will put on a total of 97 shows from 5 October to 10 December. 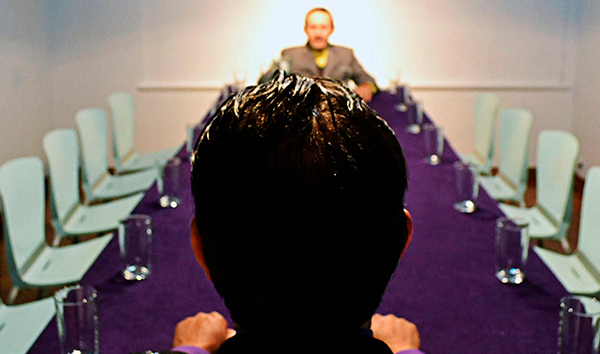 Carmen Calvo accepted the commission for this edition of the “Temporada Alta” festival’s poster with great enthusiasm: “my travelling companions on this journey are just wonderful”, says Carmen Calvo, referring to the other artists who have preceded her, including “the Grand Master”, Antoni Tàpies. She emphasises, “influences are what allow artists to go forward”.
Influences are of also of great importance when it comes to commenting on the image this year’s poster image: the blindfolded female figure makes reference to the sculptures created by Joan Miró incorporating various everyday objects. Carmen Calvo’s woman is composed of a mannequin’s head and a bench.

As one of the legs of the bench is broken, the artist propped it up with a box and two more pieces of wood. “I didn’t focus on one specific sculpture by Joan Miró, but they form part of the story”. Calvo explains that images of works of art which have particularly drawn her attention, like those of Joan Miró, hang on the walls of her workshop, her travelling companions in her work and her inspiration. “I always like to state my influences. There were artists before Miró who worked with objects, but I like his work and I like to look at the examples I have surrounding me” says the artist.

Carmen Calvo’s figure is also full of mystery: Why is she blindfolded? How did the leg of the bench get broken? Who propped it up with the box and pieces of wood? The traces left by all these actions add a layer of intrigue to the final result, and one might think that the composition is the fruit of a brief work of Object Theatre. What is more, the work has another layer: to create the poster Carmen Calvo has chosen a past work, unseen before in Spain. She exhibited it in Geneva and it currently belongs to a Turkish collector. It would be wonderful to see the collector’s face when they see the work on banners and the rest of the festival materials. Even so, Carmen Calvo concentrates all these actions into two interpretations: the theatrical character – “is what takes on importance,” she explains – and the very essence of the theatrical performance: “I think my piece is just right for the festival. This woman who looks but cannot see, is really the way in which theatre is watched. It is the look of the voyeur, of the spectator. She is basically the great theatre voyeur.”

The past materials that appear in the works of Carmen Calvo are redressed with an up to date layer, since they were used to debate personal rituals which are still celebrated, such as “weddings and communions” and different “social strata”. In the area of the theatre, the artist also plays with time: she is interested in companies of her own generation such as Els Joglars and La Fura dels Baus, but also in the deepest roots of the theatre: “I love the theatre itself, but I also refer to ancient theatre and opera, through which the theatre came into being. Also in celebrations like the Misteri d’Elx, which was one of the earliest stage sets.”

Regarding her experience in the theatrical world, it cannot be said that she has designed a stage set but she did give permission for some of her works to accompany a reading of texts by Rafael Chirbes, called ‘Ese hombre tiene un mundo en su cabeza’’, at the Festival 10 Sentidos in May. “I think that when any artist is performing a work, they are aware of the stage set,” says Calco.

Carmen Calvo represented Spain at the Biennal de Venècia d’art in 1997, together with the poet, playwright and artist, Joan Brossa. “I liked the idea that Victòria Combalia had to display two artists, who share an objectual world but who are very different from each other, in the same show,” says Calvo. For Calvo, Brossa was a “great poet” and underlines the “conceptual” aspect of his work. “Objects have always been present since the most ancient paintings. And Brossa, after Duchamp, has said all that can be said about objects”.

Born in Valencia in 1950, Carmen Calvo trained at the School of Arts and Crafts of the Superior School of Fine Arts in Valencia. In 1985 she received a scholarship from the Spanish Ministry of Foreign Affairs and relocated to Paris. Also during the 1980s, her work formed part of the ‘New images from Spain’ exhibition at the Guggenheim Museum of New York, and also of the first edition of the ARCO fair, under the curatorship of the Fernando Vijande gallery.

Amongst the most important exhibitions by the artist, at an institutional level, are the anthology which IVAM dedicated to her in the 1990’s, her exhibition at the Spanish Pavilion of the Biennal de Venècia d’art in 1997, shared with Joan Brossa, and her show at the Palacio de Velázquez in 2003. Amongst the awards she has received during her career are the Premio Nacional d’arts plàstiques (2013). The minutes of the award give some insight into of the key features of her work, such as “research into the role of the image in the construction of subjective and historical identity” and “reflection on how the memory permeates objects”. In parallel to the influences of Pop Art, Arte Povera and Informalism, Carmen Calvo explores topical issues in her works, such as violence in society and the social rites which prolong this relationship every generation.

Carmen Calvo’s work is present in important Catalan, Spanish and International collections, such as the Museu Espanyol d’Art Contemporani, the Fundació Josep Suñol, the Guggenheim Museum of New York and the Museu Reina Sofia. It also forms part of collections such as the Col·lecció La Caixa d’art contemporani, the IVAM, the MACBA, the Centre Atlàntic d’Art Modern and the Fundació Sorigué.

In 1971 the song Soy Rebelde (I’m a Rebel) came out in Spain, performed by Jeanette, a girl with doleful eyes and a melancholic air.
The song was a global hit and became a feminist anthem in Latin America and girls under 16 in Spain were banned from listening to it.
Thus, within a still very sombre context, a girl who exuded a sheepish meekness sang Soy Rebelde and people were attracted, I think, by a desire for a distant, almost forgotten and illusory form of rebellion. As if she represented the sad image of a lost paradise.
Today, 50 years later, we are astonished to realize that this country is no longer the one where Soy Rebelde could be sung in a brothel and dressed as a priest, as Albert Pla did in the film Airbag (1997).

Instead, we find ourselves back in a space/time in which the whole of society has been enchanted by a girl with doleful eyes capable of innocently representing that image of rebelliousness we can once again see, distant and blurred.

This year, 2018, having surely witnessed the biggest decline in freedoms since the Franco dictatorship, another young and carefree girl has won the popular Operación Triunfo reality show and, soon afterwards, represented Spain at the Eurovision Song Contest.

Amaia has a brutal scenic and musical talent but, above all, she radiates truth. At a time when movements are monitored, when we all think about the consequences of our actions and fear has managed to filter into each home, she dares to leave her armpits unshaven, she farts on prime time TV and, if necessary, faces up to the most antiquated guardians of the old country without surrendering a gramme of tenderness.

In my view, she represents a natural kind of non-conformity in the face of the great struggles which are lost or still to be won in this country, as well as the inherent potency of youth in addressing them, which is why so many people from all spheres have fallen in love with her.

As an anecdotal example, I’d like to mention that she performed the song five times during the filming and cried as she did so each time. I’ve never asked her why because I think it’s much nicer to imagine the reason.

Conception and creation of the visuals: Josep Prats Sorolla