The largest event in terms of the number of shows, performances and spectators

Of all the years of the Festival, the twenty-fourth will be remembered for ending with record numbers of shows, performances and spectators. We regard it as the best year so far in terms of the interest and quality of some of the international proposals and the excellent range of productions, but also the commitment of Temporada Alta to the society of Girona. It is also the year of the link between programming and citizenship, with shows such as La cerimònia del foc by the Carabosse company, Please Continue (Hamlet) by Roger Bernat and Made in Girona: Political Mother by Hofesh Shechter. 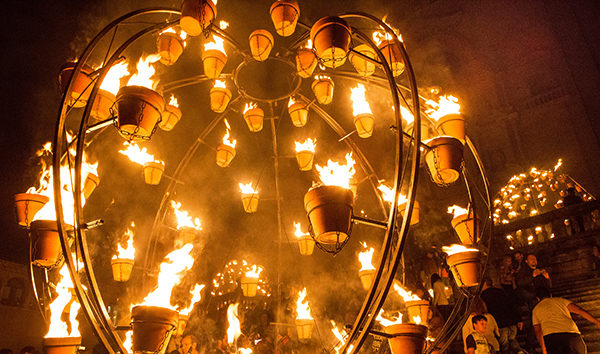 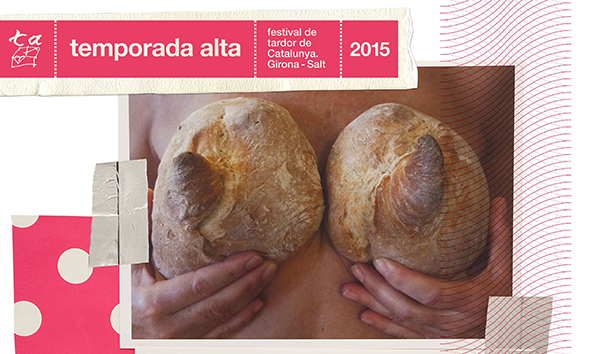 An image, “pop-ular and a little bit pop”

“I don’t at all like posters that are the work of an artist, trampled over and mobbed by text,” says Carlos Pazos, the creator of the poster for this year’s Temporada Alta: “I have a special interest in design and in graphic design. In fact, when I was younger I devoted myself to graphic design to make a few bob. I find it far more interesting when the collaboration and the work of designers forms part of the work, and is much more, and much better integrated.” For this reason, Pazos created a piece that has a life of its own, on the basis of which the designers Elpulpo Studio made the poster. “I left it slightly open so that they could make their contribution in a way that is more natural and healthier, both for the artist and the designer”.

Chronology taken from the catalogue of the exhibition that the artist has on show up to the end of July at the Centre d’Art Contemporani Piramidón: “Bisturí o arsénico”. Carlos Pazos a la col·lecció de Piramidón, Centre d’Art Contemporani. Not to be missed.
He had his first individual exhibition in 1970 and his first retrospective, “No me digas nada”, in 2007, at the MACBA (Museu d’Art Contemporani de Barcelona) and at the MNCARS (Museo Nacional Centro de Arte Reina Sofía). Premi de la Comunidad de Madrid 2003, Premi Nacional d’Arts Plàstiques 2004 and Premi Nacional d’Arts Visuals de Catalunya 2008. He is an ‘undisciplined’ artist, which allows him to use the most suitable media for whatever he wants to do at any particular moment: collage, sculpture, film, photography, installation or performance. Always in love with the music and the night, he ran the Salón de Baile Cibeles (1978-1982) with a capacity of 800 people and two live salsa and swing orchestras; the cocktail-bar, Bijou (1983-1986) and the music bar, Je-rrix (1994-95). Here he established the headquarters of his ‘Club de Fans’, the activities of which were relaunched in 2014 with the project, CP Selection, arising from participation in the Over 60 revolutions program of the Academia de España in Rome. Always in love with books and letters, in 2004 the University of Barcelona published his first book of texts Garabatos y Zarpazos, republished in 2007. The second book, Pimpollos y Papanatas, was published by Comanegra in February 2013. In love with cinema from the very beginning, in the ’60s and ’70s he made some super-8 films of which few remain. In 1987 he appeared as the protagonist in a film by Jordi Cadena, ‘Es quan dormo que hi veig clar’, based on texts by the poet J.V. Foix and, in 2006, wrote and directed Mnemocine. Película recortable which is 26 minutes long and consists of 11 audiovisual fragments. Renewing his passion for music and taking advantage of the invitation to exhibit at the Centro para el Desarrollo de las Artes Visuales in Havana, he shot the film Yo inventé unos Llopis which was shown at the Casa Encendida in Madrid in June 2012, at the Cinema Ciutat in Palma de Mallorca in September of the same year, at the Filmoteca de Catalunya in February 2013 and the Real Academia de España in Rome in March 2014. In September 2014, he presented the first phase of the project For CP Fans Only Portàtil, physically located on the premises of the Zedis factory in Lliçà d’Amunt. It consists of 13 transportable sheds which house a substantial portion of Carlos Pazos’ works, organized by topic and/or chronologically, depending on the circumstance, the aim being that his work can travel with ease from one side of the planet to the other. Currently, continuing his passion for art and literature, he is preparing a feature-length film titled Artíssimo, collage para leer, which will be shown in September at the Museo Nacional Centro de Arte Reina Sofía, Madrid.

The Gold winner of the Laus Award at the 2015 short film festival.

The short presentation from the XXIV edition of Temporada Alta, explains with sensitivity and a strong poetic tone how Theatre was born over 2500 years ago with a story that takes place in modern day Greece. Now that Greece and culture are going through such a difficult time, we want to reclaim both Greece and culture itself.

An old man nostalgically explains the origin of the Greek tragedy and the origins of our culture. With a legendary and timeless story which leaves us speechless, reflecting on the short distance between Ancient Greece, the tragic mother of all European cultures, and modern day Greece, punished by a Europe that seems to have forgotten the key to its cultural roots. But this man reminds us, with some difficulty, where we are and where we come from, emphasising that there is still a place for hope of a future revival. To be reborn we have to recognise darkness, be willing to die, a visual metaphor about life and death that is repeated throughout the account.
The short film aims to portray Temporada Alta as a protective fortification of the values and the human attitude that has guided us along our path to gain knowledge from theatre’s beginnings. It is our Tragedy, at the root of everything.
The documentary, which was filmed with the help of 20 citizens from the local area between the 1 and 7 August in Greece and Albania, is aimed at all types of audiences, and although the original language is Greek, the short film will be subtitled in Catalan, Spanish and English.